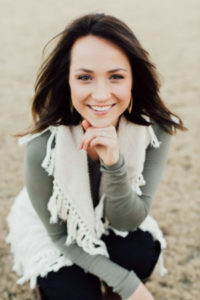 There are two things in life I know for sure. One is that we are sinners who can’t save ourselves. The other is that we were never meant to.

But I also know what it feels like for a Savior to crash into our sin. For a King to call us redeemed. For a Carpenter to rebuild our brokenness into a new creation, crafted to bring Heaven to Earth with the time we have and through the breath that fills our lungs. I know a King who makes hopeless things holy. I know a Savior named Jesus—who wrecks and redefines everything.

The purpose of my life is to point to the cross, and to encourage as many souls as I can reach to set their eyes on the One who took it in their place. I’m a wife to Jeremiah, a mom to Auden and Asher, a speaker, an author, and the world’s most inconsistent blogger. But above all things I’m a Holy Spirit-filled daughter of God Almighty who isn’t afraid to speak bold, raw, courageous truth soaked in the love and grace of Jesus—the One who makes all things new.

Mo Isom is the New York Times Bestselling author of Wreck My Life: Journeying from Broken to Bold and the author of Sex, Jesus, and the Conversations the Church Forgot (set to release 3/6/18). She is also a nationally sought after speaker, a popular faith-based blogger, a former All-American soccer goalkeeper and the first female to have trained with and tried out for an SEC men’s football team. She is widely recognized as a powerful female voice rising up for her generation, as her unique personal story and athletic endeavors have provided her with a platform to challenge, encourage, and equip others to live boldly, despite their circumstances. Having faced great personal tragedy— including battling an eating disorder, overcoming the suicide of her father, and surviving a horrific car accident—Mo is passionate about speaking on a wide variety of topics and is able to connect with men and women of all ages and demographics.

An All-American goalkeeper, Mo competed for the LSU Women’s Soccer team from 2008 to 2011. In her time as a Tiger, she led her team to three SEC West Championships and three NCAA Tournament appearances. She is the LSU AllTime Goalkeeper Record Holder (43 wins, 30 shutouts, 0.86 goals against average), as well as the #3 SEC All-Time Shutout Record Holder. Throughout her career, she trained with the U.S. Women’s National Team, was honored as National Player of the Week, honored three times as SEC Defensive Player of the Week, appeared on ESPN SportsCenter Top-10 Plays after famously scoring a 90-yard goal, and was featured in Sports Illustrated “Faces In the Crowd”, amongst many other honors.

The Broadcast Journalism major was named to the SEC Academic Honor Roll in ‘08, ‘10 and ‘11. In 2011 she was also named LSU Living Female Athlete of the Year, a Glamour Magazine Top10 College Women Nominee, a LOWES Senior C.L.A.S.S Award Finalist, and was the first ever athlete to be crowned LSU’s Homecoming Queen. The following year she was featured on the cover of 225 Magazine and named, amongst political leaders, social activists, and influential businessmen, as a “Person To Watch” in 2012.

Mo is also the first female to ever tryout for an SEC, Division I football team. From January of 2011 to August of 2012, Mo trained with the LSU men’s football team as a place kicker.While the athletic endeavor garnered national attention— including an appearance on The Ellen DeGeneres Show, ESPN, CBS, Fox, and countless other television, radio, and digital platforms—Isom’s focus and passion were derived from her desire to live boldly and pursue the stirrings of her heart, no matter the odds.

While the athletic and personal accolades have been humbling acknowledgements of Mo’s driven work ethic, the highs and lows she has faced in her young life have, most importantly, shaped her into a woman of character, strength and purpose. Mo was the recipient of LSU’s Eye of the Tiger Award, as well as nationally recognized as The Wilma Rudolph Student Athlete Achievement Award. It is her heart to inspire hope in those who feel hopeless, encourage strength in those who feel bound by life’s circumstances, and empower this generation to live life with integrity, character, and passion.

Mo’s currently speaks to audiences across the country, as well as internationally. Her honest, captivating and thought-provoking speaking style serves to both challenge and motivate listeners to overcome life’s adversities and live boldly. Her videos and writings on her personal website (moisom.com) garner millions of viewers and she is regularly featured on MGM’s online platform, LightWorkers.com. Mo’s first book, Wreck My Life: Journeying from Broken to Bold released in August 2016 and quickly debuted as the #11 New York Times Bestseller in the Sports category. She lives in Atlanta with her husband, Jeremiah Aiken, and daughters, Auden and Asher.