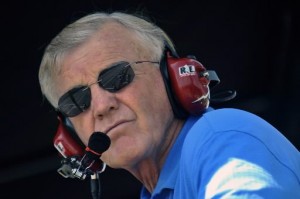 Joe Gibbs, former Washington Redskins head coach and now NASCAR team owner, will be in Charleston on Wednesday for a prayer breakfast at the Charleston Area Convention Center.

Tickets for Wednesday’s prayer breakfast are sold out.

The Charleston Leadership Foundation is going long this year with its annual Charleston Community Prayer Breakfast.

Football great Joe Gibbs is the keynote speaker. Gibbs, who was head coach of the Washington Redskins before becoming a NASCAR team owner, is coming to talk about the importance of God in his life and the ways in which Christian faith can help one stay in his lane and focus on the finish line.

He will touch on themes presented in his new book, “Game Plan for Life.” Wednesday’s prayer breakfast will be Gibbs’ first official speaking engagement in Charleston.

He said he felt a little guilty becoming a professional football coach: It didn’t seem like a proper job, it was too much fun. But then he realized that God creates diversity and expects variety.

“Certainly, God wants us to be the absolute best we can be in our profession.”

Religious faith made its entrance in his life when Gibbs was in the third grade studying amoebas and learning about evolution.

“That didn’t sound real good to me,” he said.

His grandmother and mother brought him to church, where the pastor assured Gibbs that he was created by a loving God, not descended from the muck. At 9, he embraced Christianity, only to stray in his 20s. At 32, he rededicated himself to Christ, he said.

For Gibbs, prayer is not an isolated activity one does periodically each day or week, or only in church, or only at prayer breakfasts. Prayer is “constant communication with God,” he said.

“Generally, when I’ve gotten in trouble is when I haven’t been in a close relation and walking right next to the Lord,” he said.

Public displays of religious faith, such as players on the football field making the sign of the cross when they score, do no harm, Gibbs said. Everyone is responsible for himself and chooses the ways in which his beliefs are expressed. Overt religiosity “doesn’t bother me at all,” he said. “I kind of admire that. There’s plenty of the opposite. I wish we could reinstate prayer in school. I’m grateful that in motor sports we still get to pray before an event.”

Football and NASCAR are alike in many respects, so the transition was a smooth one, he said. Both are team sports. The quarterback is equivalent to the driver; the role of the head coach is not unlike the role of the crew chief; each has about 13 people on the coaching staff or crew; each has an owner. The biggest difference is that the economics of motor sports is sponsorship driven.

Nearing 70, Gibbs spends a lot of time with his eight grandchildren, playing football, golf, soccer and baseball, taking the children to bicycle races and listening to piano recitals.

“The biggest thing I second guess is missing my two boys growing up (during coaching years),” he said. So he makes an extra effort to remain involved with his family now. “I try to do something every day.”

Gibbs said he is “very concerned” about the current cultural climate and direction of the country.

“What I’m praying for is a revival in America,” he said. “My hope is that a revival would lead us to godly principles.”

His book, “Game Plan for Life,” attempts to address three big questions: Can the Bible, an intimidating book with strange language, be accessible to average people? Can a book that’s 2,000 years old still be meaningful? Does the Bible include lessons that can be applied to today’s concerns?

The book includes results from a survey asking “average Joes” what they are most concerned about and how they hope to achieve success. Eleven prime concerns were identified: finances, health, relationships, vocation, the Bible, God, creation, sin and addiction, salvation, purpose and heaven.

Each issue was tackled by an expert in that subject. The book explores these issues in accessible language, weaving together stories about Gibbs’ own experiences.

“There’s a modern-day game plan for life. Life is a game. You and I are the players, God is the head coach and we’re playing the biggest game of all,” he said. “The answer is in God’s word.”